A friend of mine gave me a book called "When God Winks at You" shortly after Ben died. It's filled with stories of amazing coincidence, showing us the subtle and not-so-subtle ways God uses to show us that He's caring for us.

It was a relatively quick read and it gave me words to be able to communicate when I experienced one of those divine appointments. The huge frog and snake Jack found the morning after his brother died: a God-wink. The sparrow that he found when our heads were spinning just a few days later: another God-wink. Examples where the God of the universe proved to us - in very tangible and meaningful ways - that we were not alone.

God has continued to show Himself in unexpected ways along our path through grief. But the most recent happened almost two weeks ago while more than eight hundred miles away from home.

Andy and I took our kids to Myrtle Beach last week for a family vacation. We knew it would be tough. This was Ben's favorite spot and he begged for us to fly on an airplane to go earlier this spring, but we went to Florida instead because the weather would have been more tropical in March. We last ventured there in August and it was - by far - our best family vacation yet. We knew it would be emotional, staying in the same place, swimming in the same pool, frequenting the same restaurants and attractions. But we decided that it could also be a time of healing for us. Andy drove straight through the night and we arrived last Monday, the 23rd.

Immediately after we arrived, Jack wanted to go to the beach. So after we got settled and had something to eat, we brought our new shovels and nets to enjoy the warm breeze and the gentle waves of the Atlantic while our kids rolled in the sand and searched for critters. 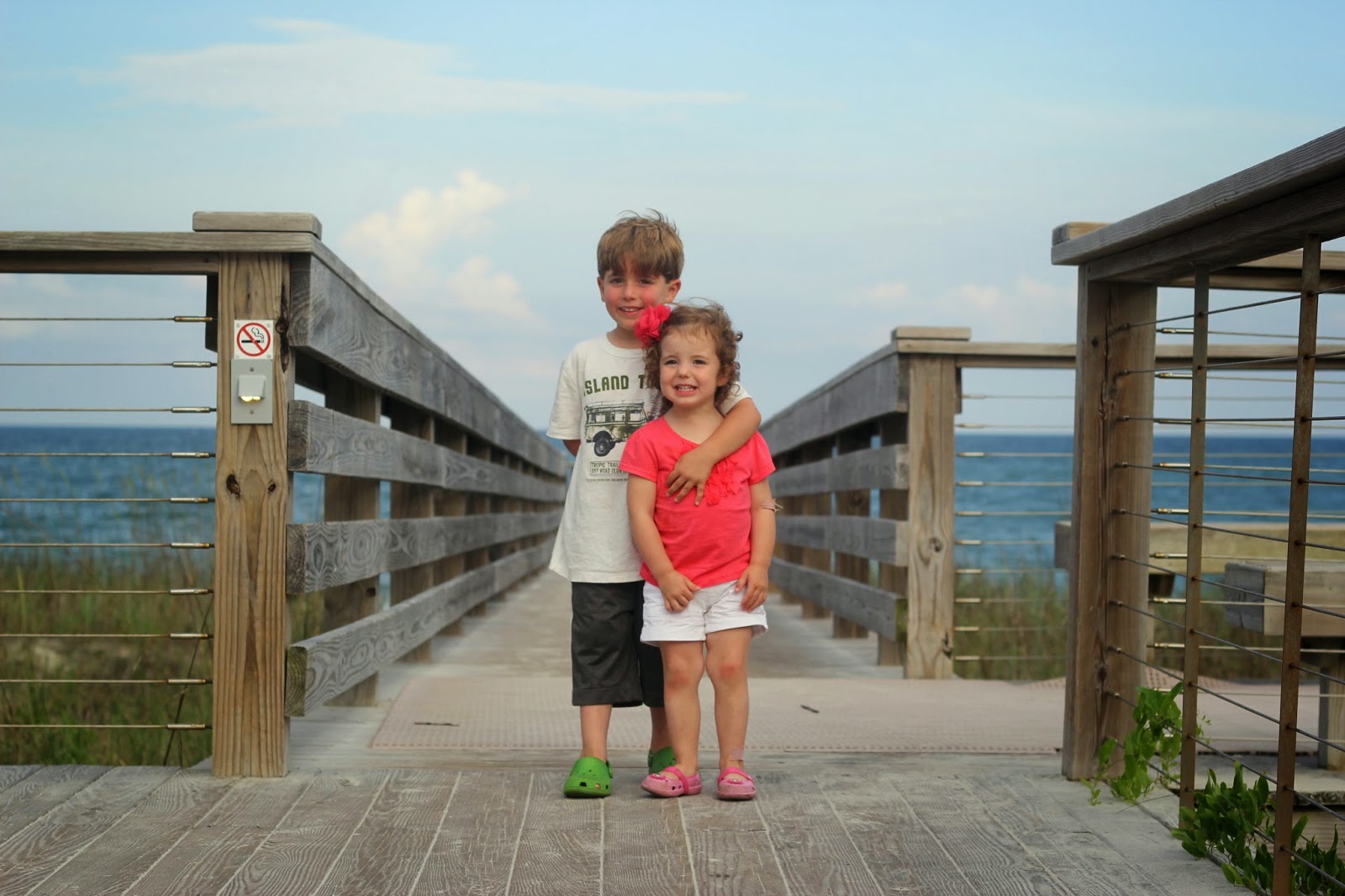 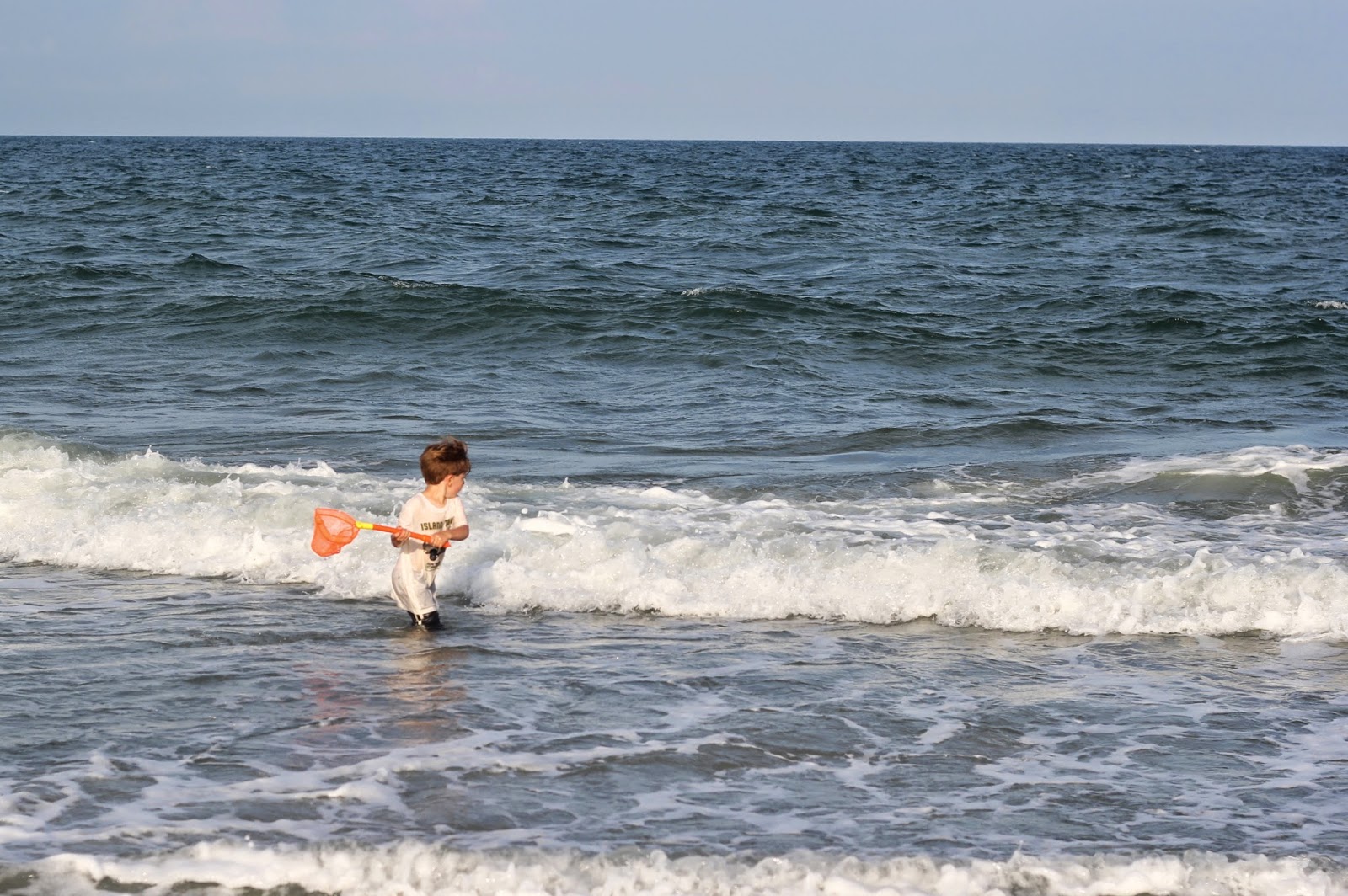 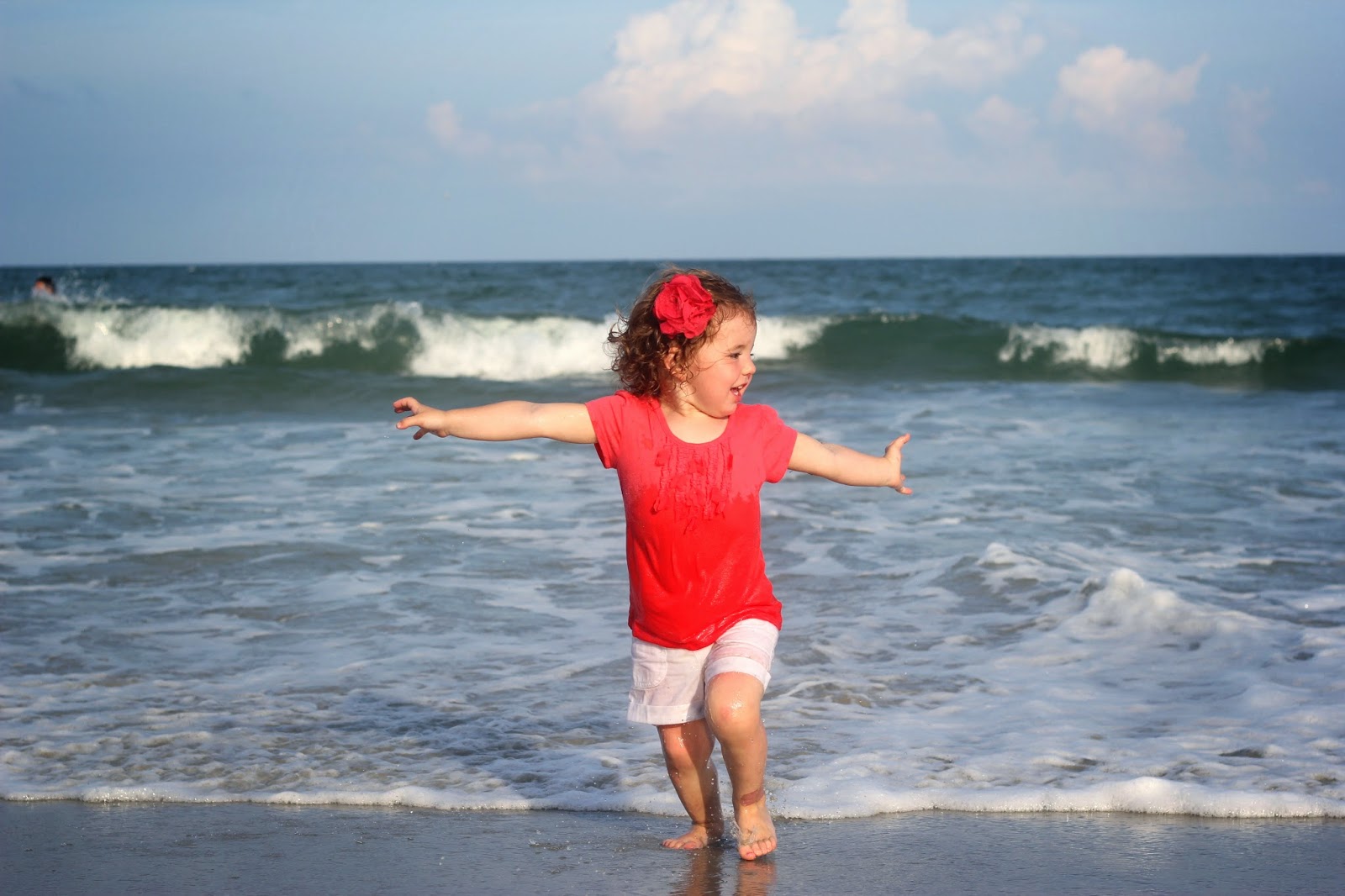 Megan Joy, truly a ray of sunshine
Meanwhile, Andy and I sobbed.

We were expecting it to be emotional. Not physically painful.

After we put the kids to bed, we wept. Andy cried himself to sleep and I went on the back patio to let it out and not wake up the kids. I wanted to throw up. My stomach hurt. My heart ached. It felt like someone had punched me in the gut. Repeatedly. And I desperately wanted to go home. This was just way too painful.

You know, maybe this was just too early for us, I thought. Maybe it was just too much, too soon. We could literally see Ben run alongside his brother in the waves. Jack still fit into the same swimming trunks he had worn in August. Physically, he doesn't look that different than when we visited less than a year ago. Megan rolled in the sand and made funny faces as the waves crashed on her little body. And she looked sooo much like her brother. This was just way too difficult.

If I hadn't just gotten out of a car after fifteen hours of straight driving (and on the eve of my third trimester,) it would have been easy for me to convince Andy to leave. He felt the same way. But Jack and Megan were having so much fun. Jack had been counting down ever since we told him we were leaving, just nine days before. This mommy knew I couldn't have handled more questions of 'How much longer till we go to the beach?' than that. We couldn't let them down. We would have to stick it out.

As with most things in life, I'm so glad we did. The first two days were the hardest. We cried at almost anything. Especially when Jack would excitedly ask us, "Remember when me and Ben used to do THIS?" We continued to cry as we needed, whenever we missed our son more than we could contain.

But even in the midst of our storm, God was there. More than eight hundred miles away from home, and God chose to show Himself in the smallest and most meaningful ways. To give us hope. And peace. 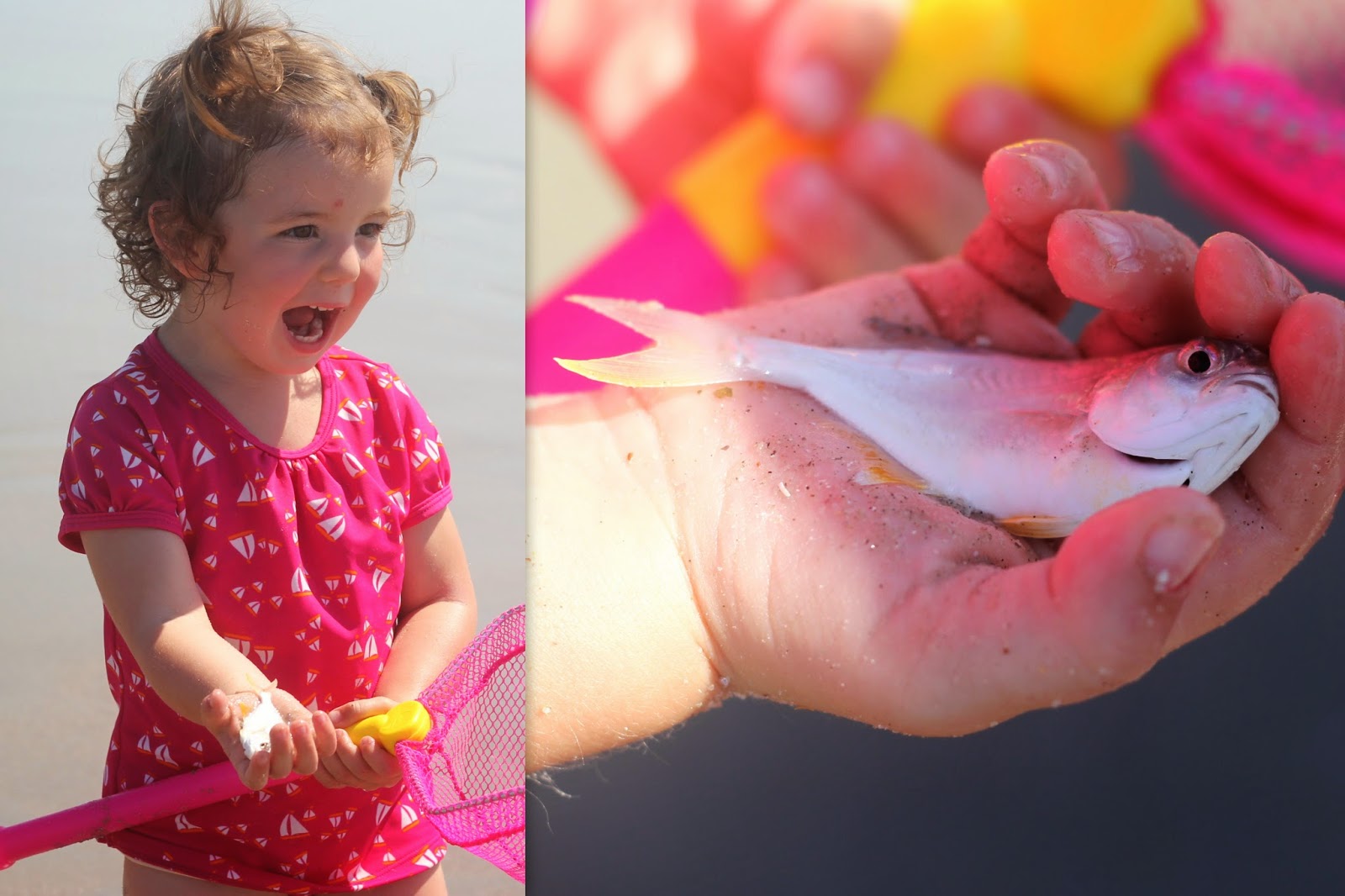 The biggest fish we caught was grabbed by Megan! She was ecstatic.
The second day we were there, we saw a cardinal. He was beautiful. His high-pitched little chirps got our attention first when we were swimming in the pool. And then we'd spot him: on the fence, in the tree, on the bench. Just a few feet from us. Such a lovely sight. 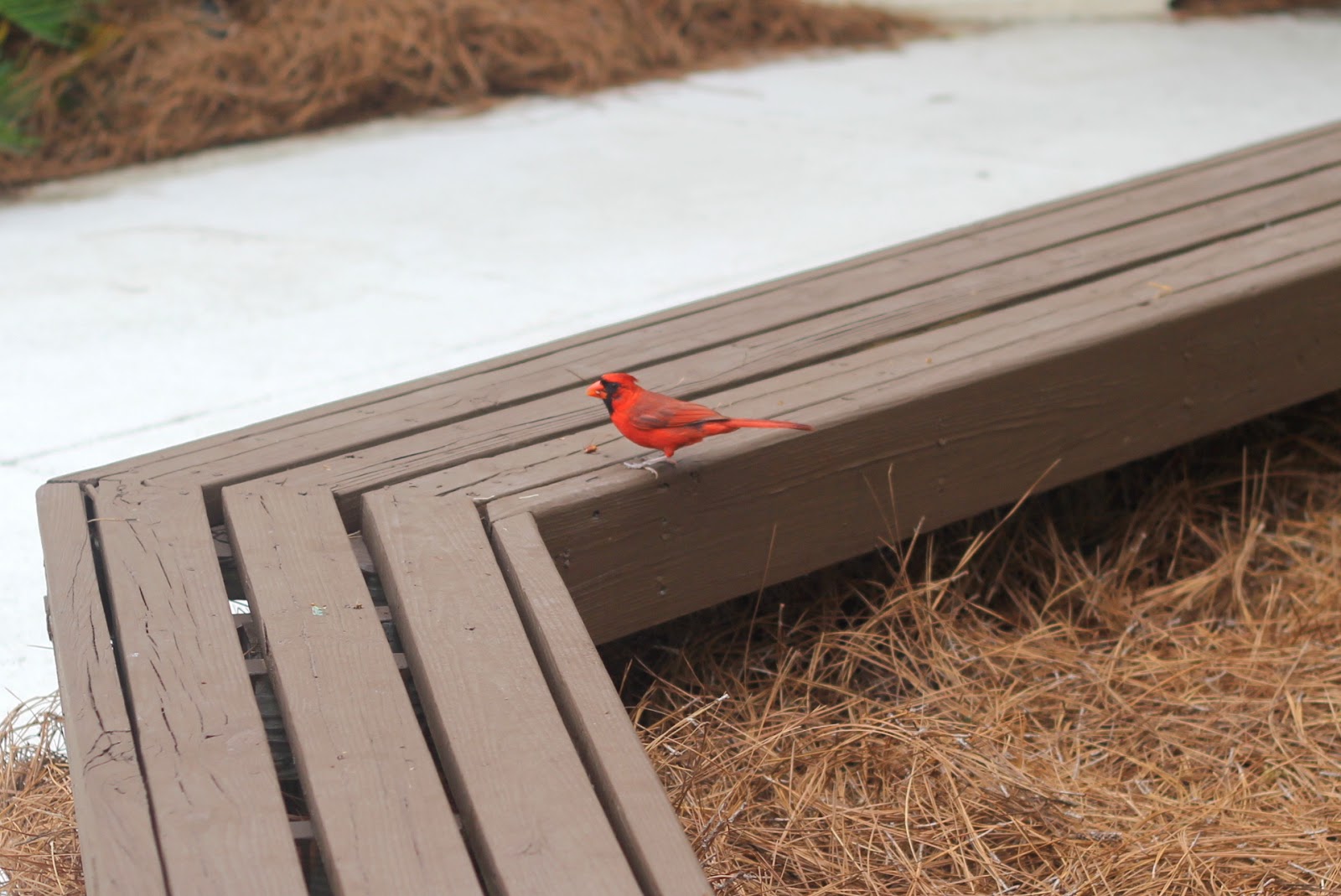 On the bench inside the pool
Now, I've been to this same exact same vacation spot just south of Myrtle Beach about a dozen times. It had been my family's favorite getaway since I was in high school and I had spent many summers there enjoying the simplicity of the pool and the beach even before I met Andy. Once we were married, we went there for our first summer vacation and then we took the boys when they were eighteen months old. Then we were there this past August and then again this June.

And this is the FIRST cardinal I have ever seen there. Ever. 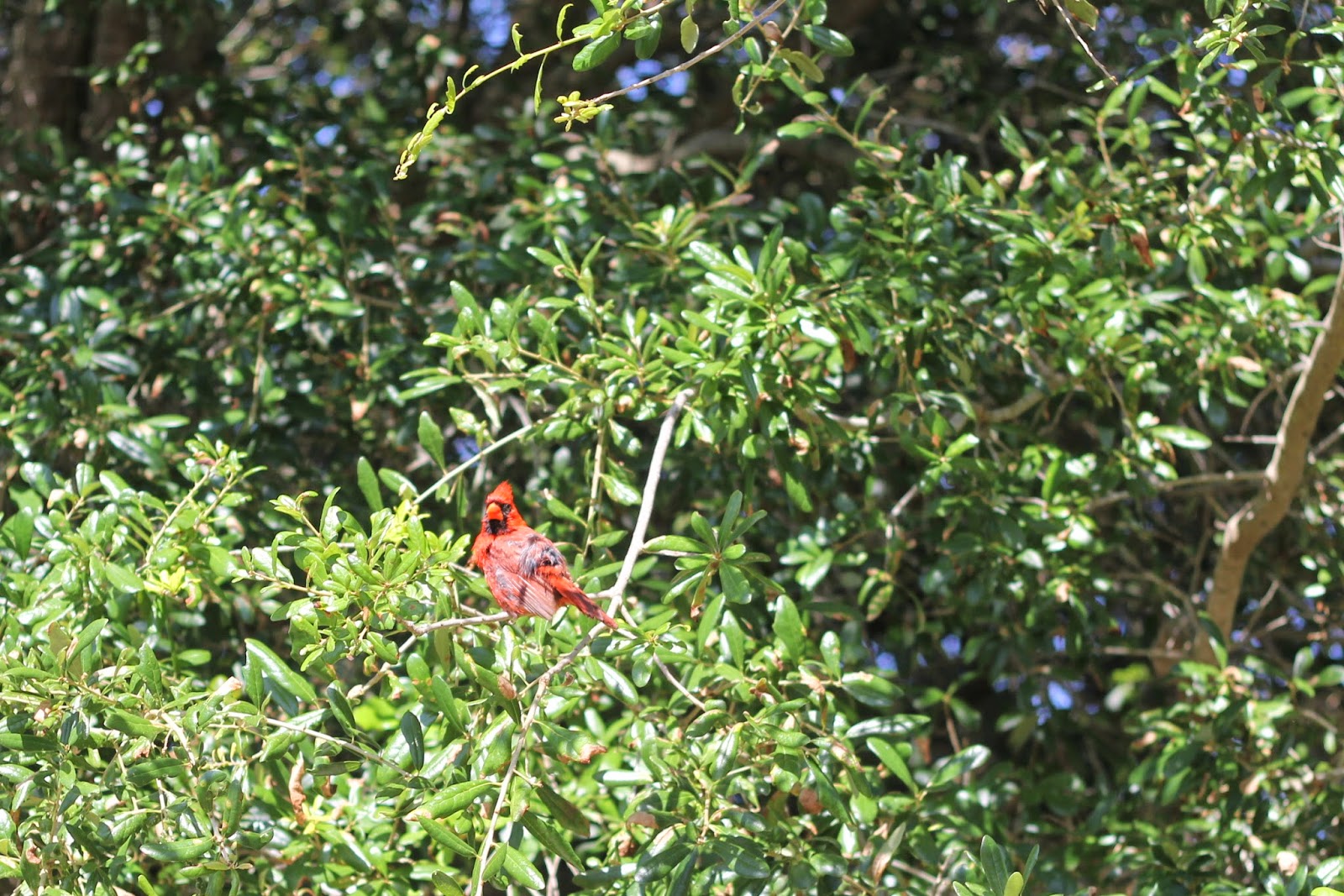 Coincidence? Perhaps. But I seriously disagree.

That cardinal visited us every single day during our visit. Every.single.day. It was as if it were trying to make sure we were paying attention to it, the way it flew around us and screeched his loud chirp. Right away, we knew that it was a sign from God, a sign that He was with us. That Ben would not be forgotten. A God-wink. The third day, we started saying, "Thanks, Ben," whenever we saw our new friend. Jack would excitedly jump out of the pool as if he were trying to catch him. It became something we looked forward to everyday.

I believe that God sent that cardinal to that exact spot just for us. We all did.

When we returned home, sun-kissed and rejuvenated, I uploaded several pictures onto Facebook to share with my friends. Another mom of twins commented on the photo/story of the cardinal saying that one of her friends posted this a while back. And it gave me chills.

"A cardinal is representative of a loved one who has passed. When you see one, it means they are visiting you. They usually show up when you most need them or miss them. They also make an appearance during times of celebration as well as despair to let you know they will always be with you. Look for them, they'll appear."

Now, I don't really get into folklore or myths or old-wives tales. But c'mon, now. That is just beautiful.

An opportunity that God used to remind us of His grace. Hope. And security.

The wounds we carry are deep. As someone said, we loved much and so we grieve much. Over the past few days, I have sobbed unexpectedly after taking off Ben's Toy Story bed sheets to replace them with new girly ladybug bed sheets for Meg (who's been sleeping in his bed, next to her brother.) I cried to see Megan wearing the lanyard with the kids' photo IDs from the town pool last summer. And just today, I sobbed uncontrollably after receiving our new insurance cards with only four family members listed; it was just another harsh reminder of Ben's absence. I honestly thought that it would get easier. That I would somehow cry less or feel less of our loss over time. But that has just not been the case. If anything, it has gotten harder. More difficult as we experience the consequences of our loss in our everyday activities and celebrations. In my head, I am grateful to know that Ben is not in pain and that he is enjoying the fullness of God's presence in the glory of heaven. But in my heart, I miss my son. I miss his influence in our family. And I don't suppose that will ever go away. 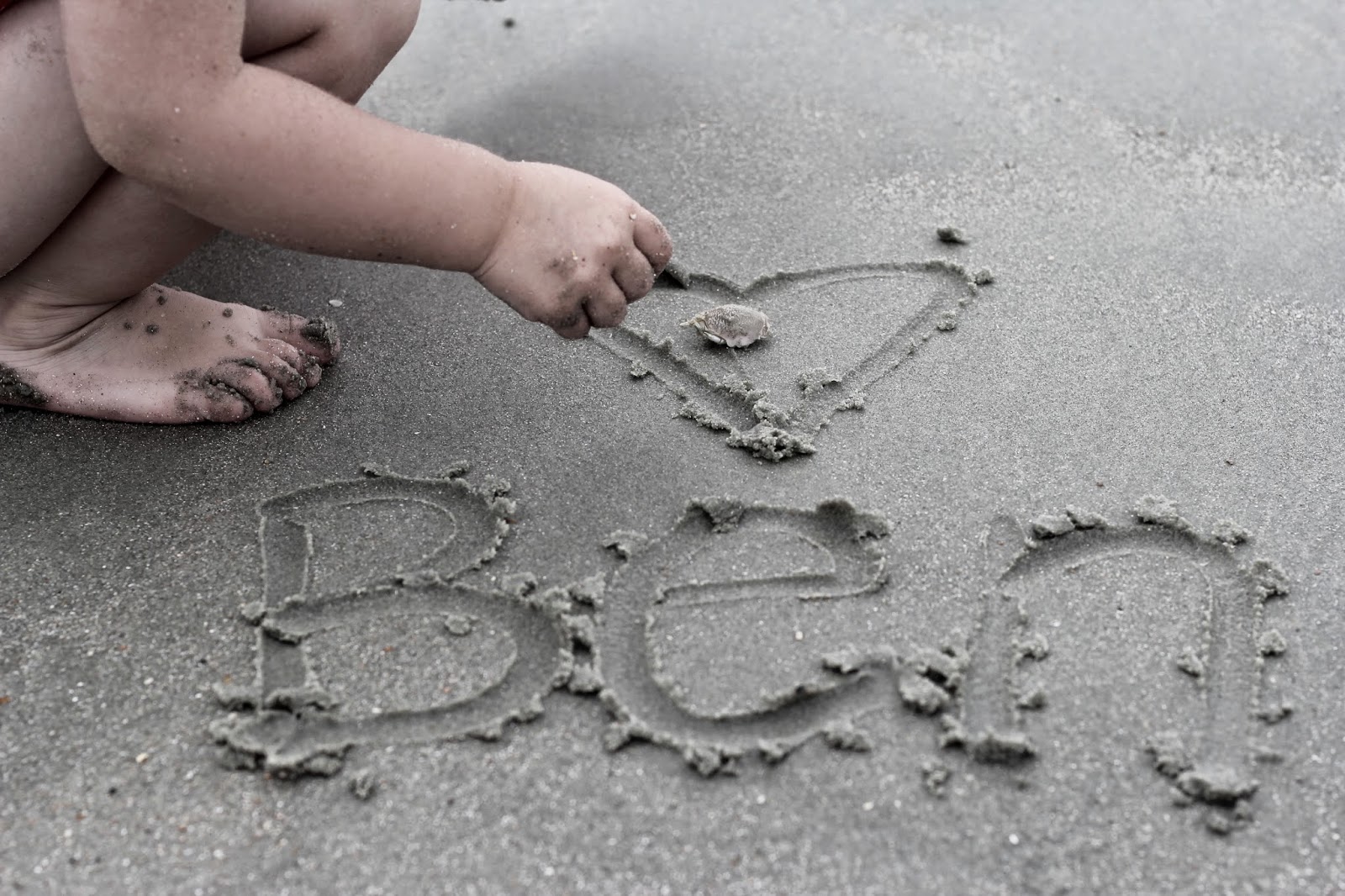 As I was enjoying a quiet moment on the beach, I wrote Ben's name and then Megan came up and put a sand crab inside the heart above his name. It was as it should be.

But even in our grief, there is much joy. I have now rounded the corner of the third trimester and our (seemingly very healthy) baby girl should be here in about ten weeks, just after our oldest begins kindergarten. Jack is enjoying his new summer activities and Megan is just exploding into such a vivacious and fun-loving young lady right before our eyes. Yesterday, I asked her if she liked fireworks. "No, I not like fireworks," she responded. "Dey scare me. I yike worms, though!" How is she only two? Jack's simple child-like faith daily encourages my own.

Where there is sorrow, there is also joy. Where there is grief, there is also much happiness. Andy and I have discovered depths of God's grace we never would have cared to know if we hadn't needed to rely on it as much as we do. As difficult as it may feel at times, God is there. 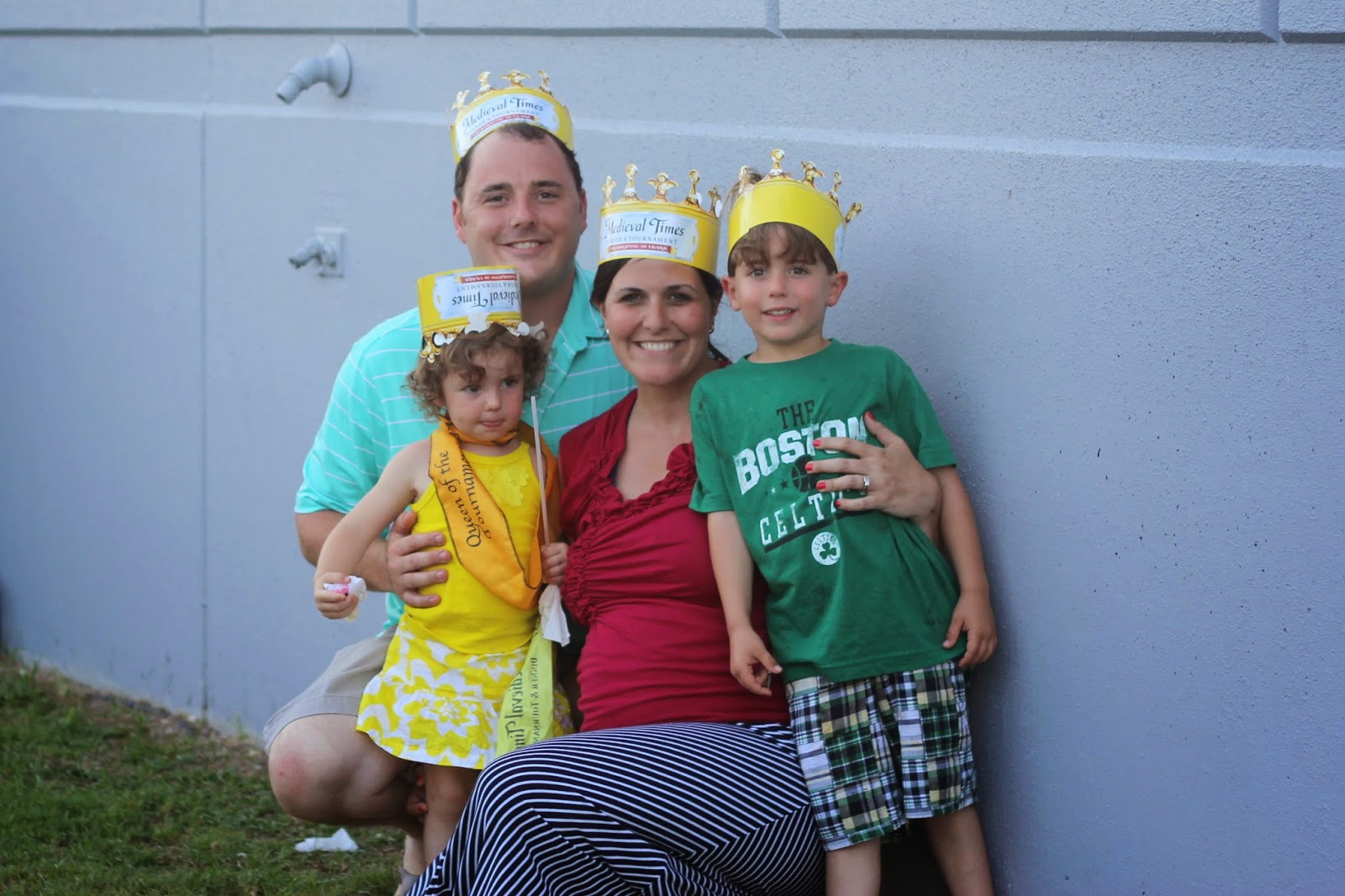 Our family at the Medieval Times. We were cheering for the yellow knight who not only won that evening, but he also awarded Megan as the Queen of the Tournament (who apparently, wore the appropriate color!) Needless to say, it was a pretty special evening for our family.
I hate that this has happened to us. I hate what my son had to go through. I hate that my kids will grow up without Ben right beside them. I hate the pain that our extended family and friends have had to experience right along with us. But as little as I understand, as much as my heart aches every day, I am confident to serve a loving God that swoops me into His arms on a daily basis. Who lets me cry, vent, and scream. And then wipes away my tears and gives me the grace to continue forward. One foot in front of the other, one step at a time. 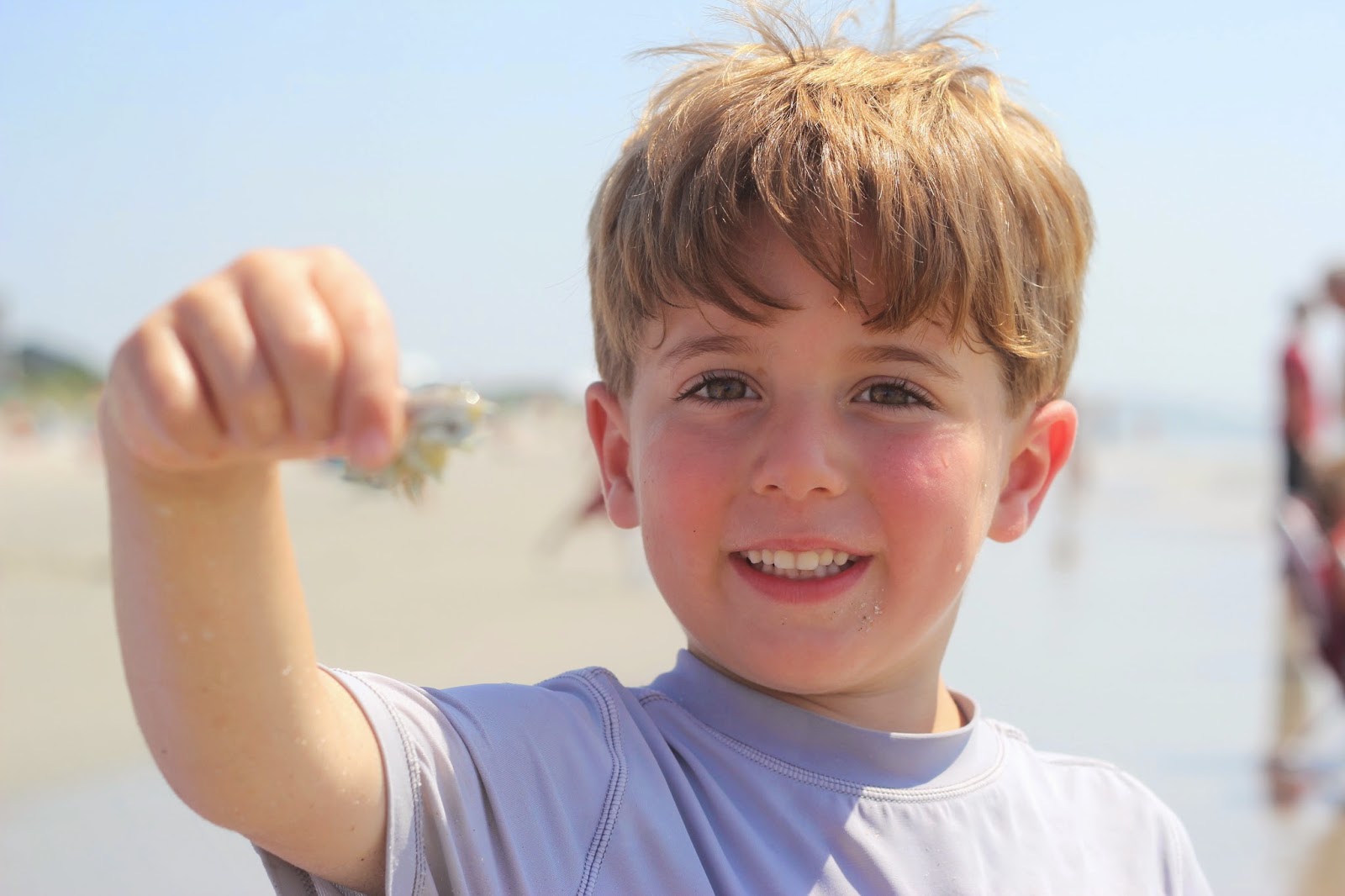 I wish I could say that I'm over it. I'm recovered. I'm fully healed and at peace. But I'd be lying.

I will always carry this wound, this invisible wound. All of us will. But I am so grateful that I'm not doing this alone. And even though I can't touch my Heavenly Father, I know He is there. Even though I haven't heard Him speak audibly, He has spoken to me in so many ways. Even though I can't prove that these stories aren't just mere circumstances of fate and coincidence, I know beyond a shadow of a doubt that He is real. That He is God. That He is sovereign. And that He will continue to look for ways to tangibly remind me of His goodness. 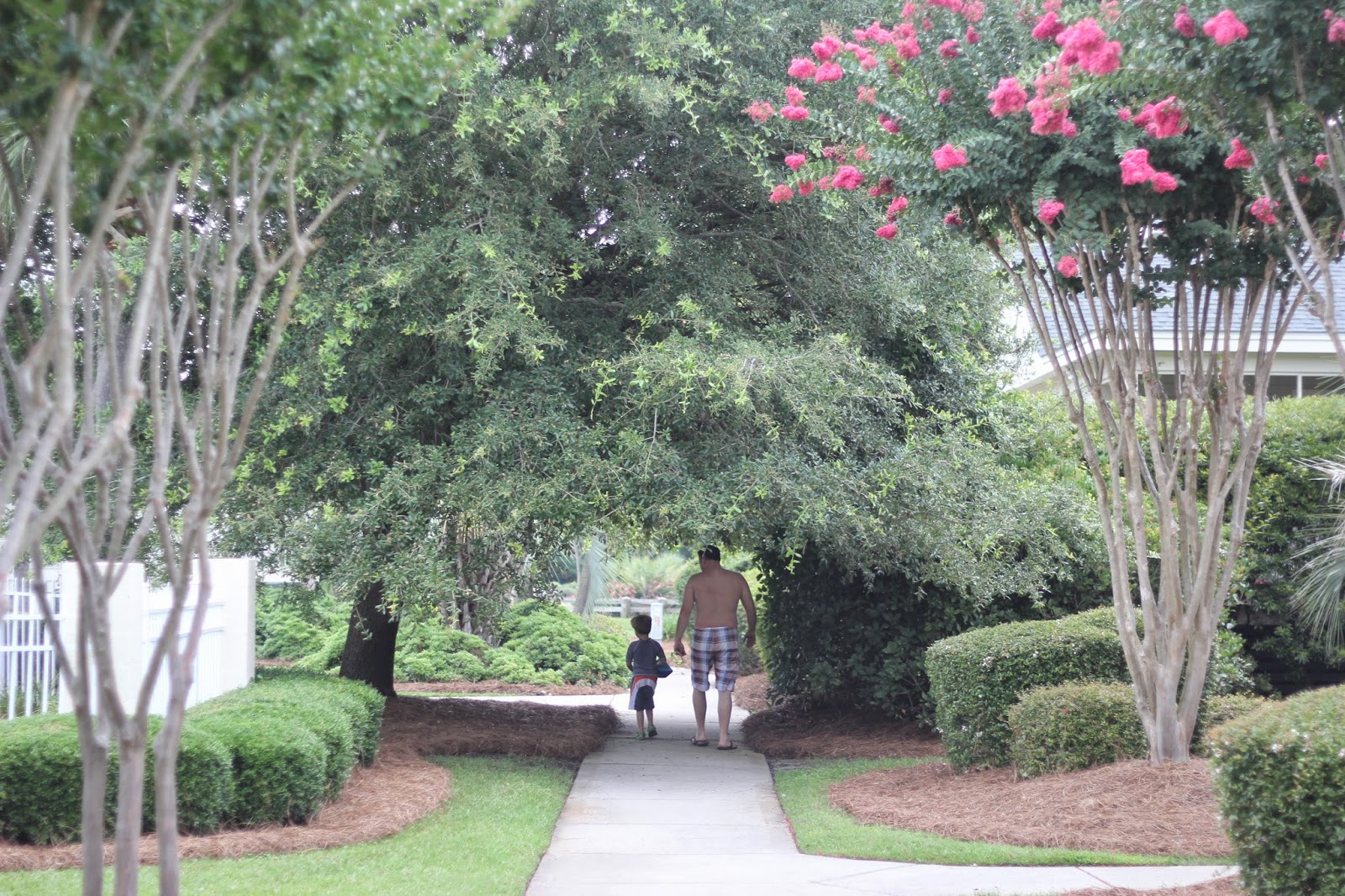 To God be all the glory.
Posted by Mindy Sauer at 7:19 PM