Exploring the Depths of God's Grace

I created this blog on February 20th. Ben had just had brain surgery on the 11th, we discovered that the tumor was cancerous on the 14th, and he was headed into six weeks of chemo and radiation beginning the 25th. Family members encouraged me to create a central Internet site to help keep loved ones connected with Ben's progress. I had been worried that Ben would become a 'cause,' a reason for people to doubt and mistrust God's plan. His plan for our beautiful son. But once I realized that it really was the best way to communicate regular updates, I conceded.
I created a Caring Bridge site but abandoned it after just a few minutes. It didn't take me long to get frustrated by the fact that I couldn't upload as many photos as I was accustomed to. So I made the transition to Blogger. I have managed several blogs in the past as a way to journal, communicate, and encourage. Surely this was an appropriate stage for Ben's updates. We would create a Blue4Ben Facebook page in order to help friends and family know when I had updated the information.
As Ben's story and photo entered everyone's Facebook newsfeed, people were drawn into his story. The dimples. The eye lashes. The fact that he was a twin. And that it was obvious what a good boy he was. I never imagined the number of people that would have been invested in his story.
As the 'fans' on the Facebook page increased, so did the prayers. Messages and cards of encouragement were sent every day. I wasn't sure exactly how God would have chosen to use our story - I had been hoping it would have been a place for Him to receive glory for a physical miracle of healing - but we simply tried to be faithful.
The support we have received has just been unimaginable. There is no way to describe the comfort we have received knowing that prayers have extended through all parts of Western New York, the nation, the world. We have been blown away by the ways God seemed to be using Ben's story to heal, comfort, and reach people for His glory.
But even when God called Ben home, when his body just couldn't take the intensity of the aggressive tumor, we grieved our loss. And yet we celebrated the enormous impact one little boy had on our world.
I hadn't thought about the future of the blog. Its original purpose had been accomplished. People were informed, they knew how to pray, and God's name was exalted. At the funeral, people encouraged me to keep writing. That our story was not finished. I wasn't exactly sure how to respond. But the name of the blog is "Ben Sauer, a little boy waiting on a miracle." That chapter is now closed. I wasn't exactly sure how/if God wanted to continue using it in the future.
But I still do have words to share. I still have updates to give. The subjects have changed slightly, though. Mostly because their status has changed. Ben is no longer inhabiting an earthly body. He is enjoying the warmth of heaven, complete with wings. Jack and Megan (as well as their 22-week sister in utero) are still here. Still grieving. Still missing their brother. Andy and I still shed tears daily in missing our beloved son. The healthy one. How he was before the effects of a tumor struck his small body.
However, the number of Facebook 'fans' has increased by several thousand since Ben's homegoing. Perhaps our story wasn't over. People want to continue to see how Ben's siblings are handling his absence. They want to know how to pray our family through this transition. And perhaps see pictures of the littlest Sauer when she makes her arrival in September, Lord willing.
So I will continue to write. At least for the time being.
As God inspires, I will write.
-------------------------------
Emotions have been a constant rollercoaster since Ben's passing on Tuesday, May 13th.
Shock.
Disbelief.
Relief.
Comfort.
Sadness.
Joy.
Everything feels so surreal. We know it's happening. We feel every single emotion. We cry all the time. We laugh and celebrate. And yet, it doesn't feel like this could all be real.

Our son isn't here anymore. Our son is in heaven.
Not exactly sure when that's going to sink in completely.
The events over the past two days to celebrate Benjamin's life have been sweet. There really was so much to honor a little boy's legacy after a mere 1,833 days of existence. The memorial was amazingly beautiful. Jack gave a pre-recorded eulogy in honor of his favorite brother and we had hundreds of pictures scrolling through the ceremony, reminding us of the vibrant little boy that now was pain-free and enjoying the benefits of heaven and his Heavenly Father. (If you would still like to see the recorded service at The Chapel, you're welcome to view it here.)
My immediate family sat at the burial, Andy to my left, Megan on his lap, Jack to my right, and my secondborn's old body in the casket in front of me. Pastor Jerry said a few words and then we sang "Jesus Loves Me." It was my request. When I sing to my kids at night, I always end with that song. It signifies that it's the end. I only made it through the first few words, though, before I had to rely on those strong enough to carry the tune without me.
Jack looked up at me with those big eyes and asked if I was okay. "Yeah," I stifled through whispered tears. "We're just really going to miss him." And then my firstborn. My thoughtful Jack. Took his left arm and pushed it behind my back and rested his head on my arm. He was trying to comfort me. His mother. He had never done anything like that before. It was sweet. So selfless. So thoughtful. I was deeply touched.
The pastor said we could take as long as we needed. We stayed to grieve a bit longer and then asked Jack if he was ready to go. "No. Just another minute," he said. That took us by surprise, too. We gladly obliged and sat back down. And then he asked, "When are we going to put the flowers in his grave? Like we did for Grandma Sauer?"
What a sweetheart.
Jack remembered us taking roses and putting them inside his grandma's grave this past October. Of course we could do that. "Definitely!" I told him. "Let's do it right now."
He shrugged both shoulders and turned up his right hand. "Yeah, if they say it's okay."
Oh, yeah. It's definitely okay. 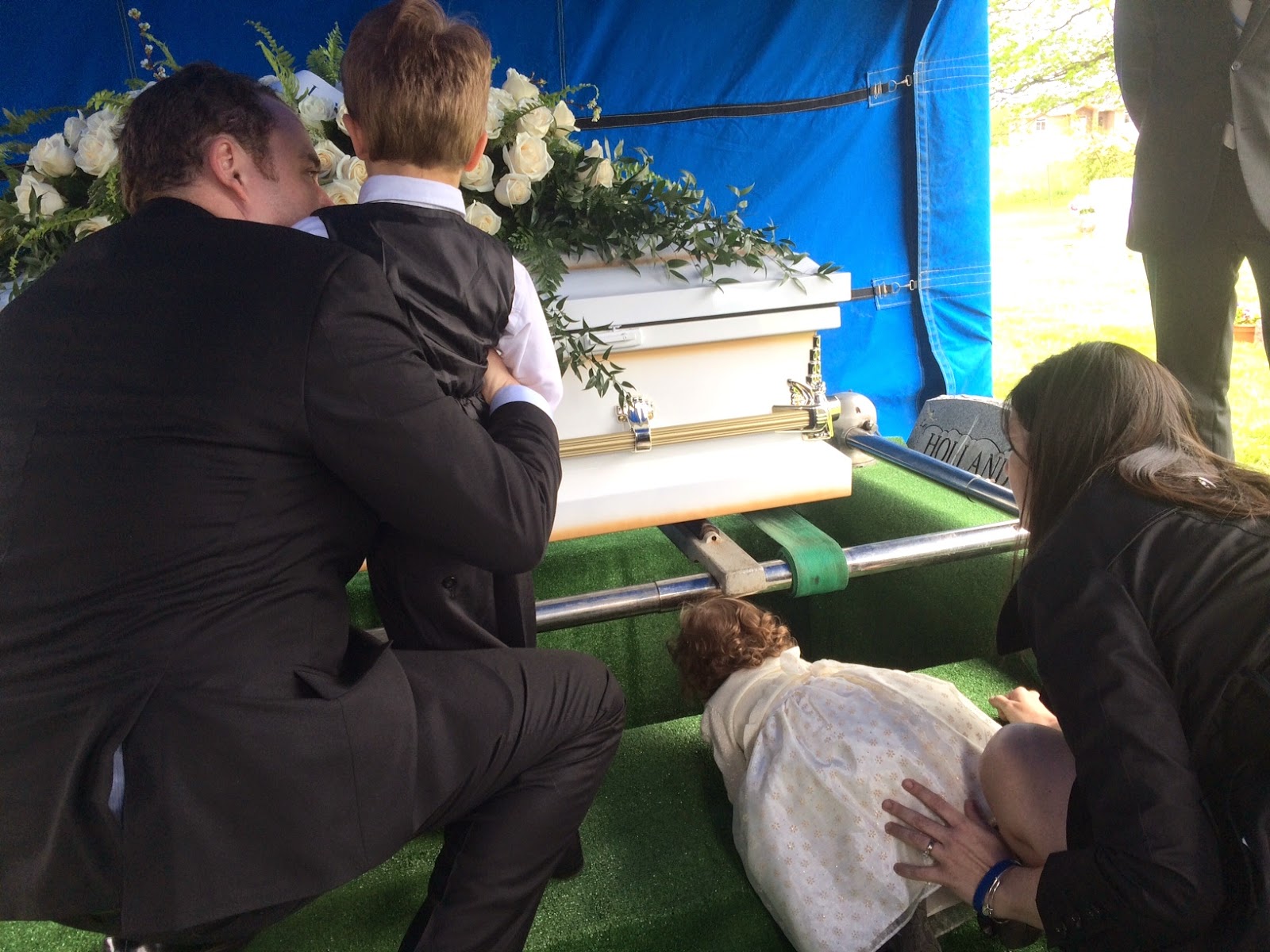 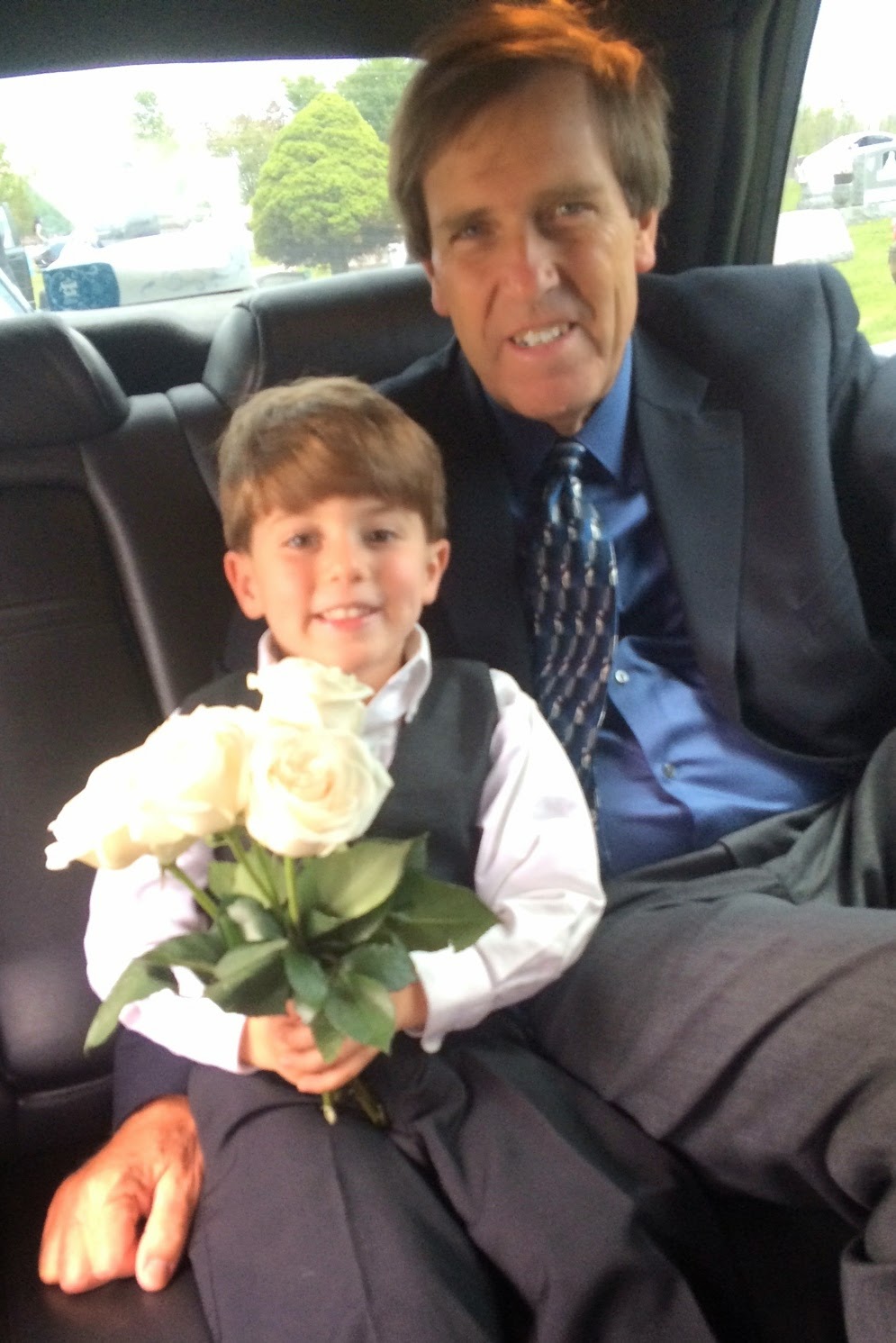 Jack and his flowers from Ben's centerpiece, next to his Papa. My dad.
I had to keep pulling Megan back from falling into the shallow grave, but she gladly joined her family in dropping several white roses inside Ben's final resting place. And all of our hearts felt full. Jack took a handful of roses to take home. It meant so much that he had spear-headed so much of the events of his brother's burial.
We stopped at home before leaving again for the luncheon to gather a few things. I suggested Jack take his flowers inside the house. I thought it would be beautiful to dry them and do something special with them later on. But Jack insisted on holding onto them. No problem. They were for his twin, after all. He jumped around the front yard as we tried to herd him and his sister away from the mud. Then he took each of the roses and stuck them into the ground. He said he wanted to plant them. So they would continue to grow even after Ben is gone. Suddenly, drying a few roses didn't seem as meaningful to me anymore. This was, by far, a much more meaningful purpose for them. Because Jack was the one that wanted to do it. 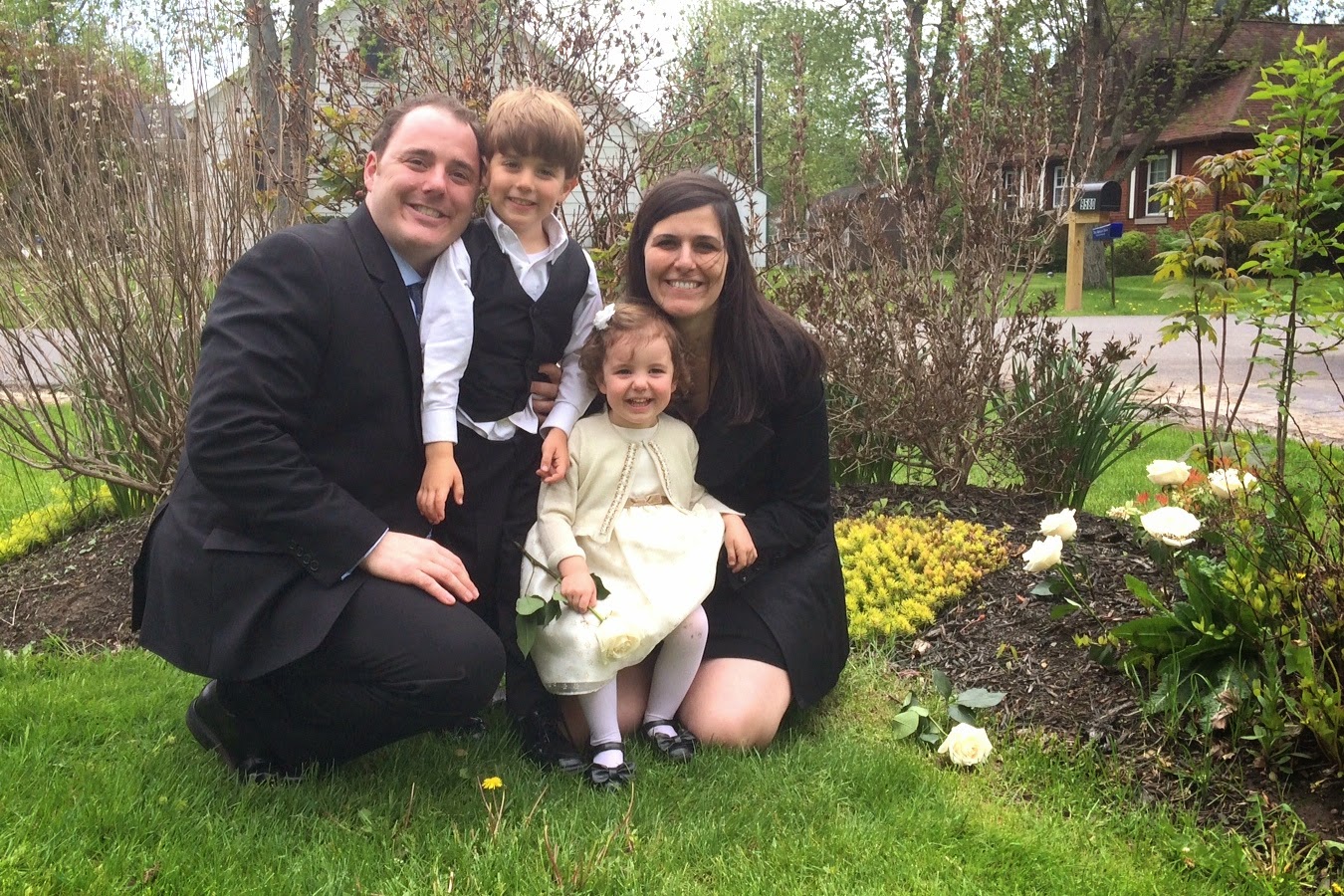