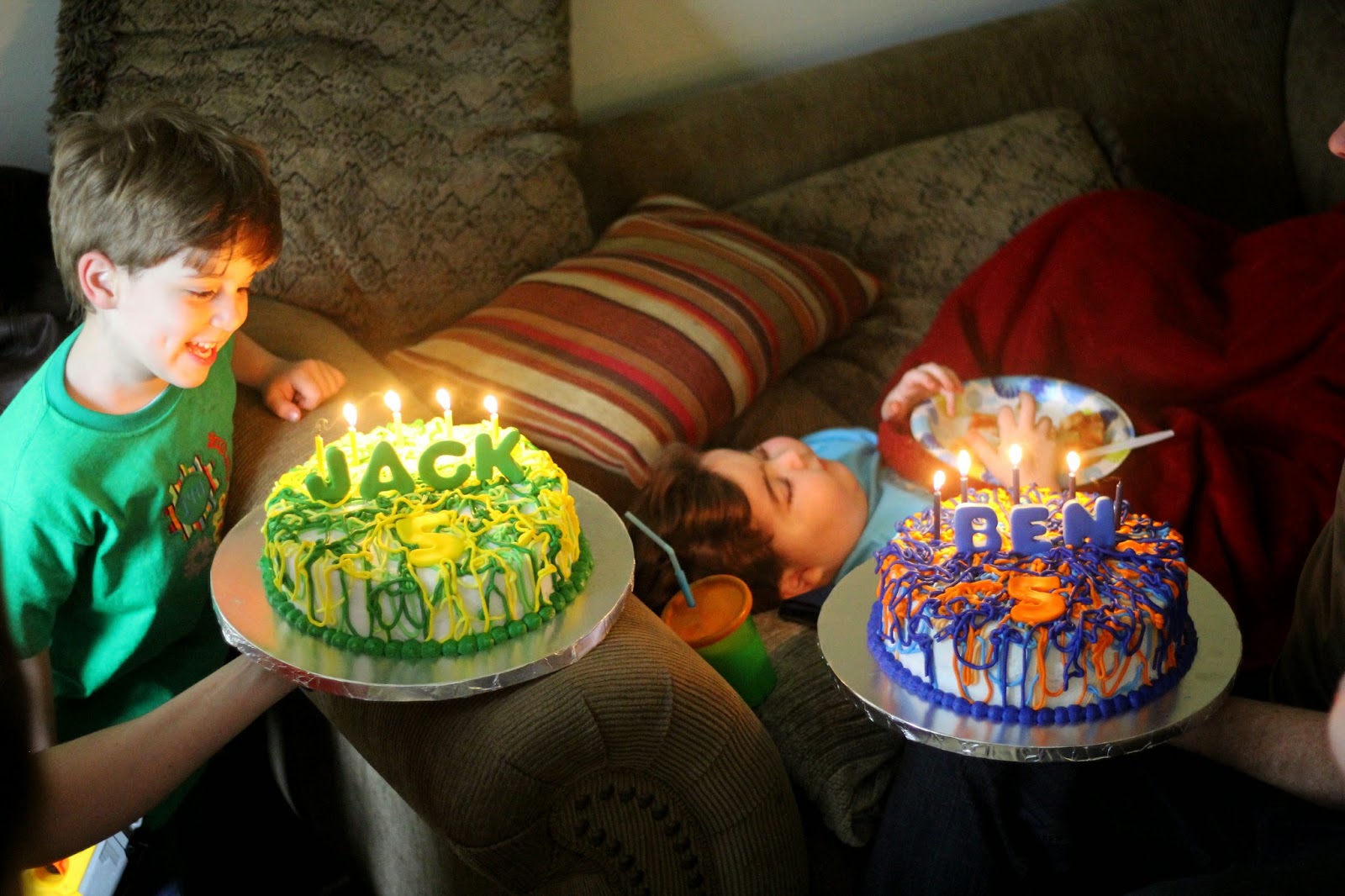 The theme of the boys' birthday party was "silly string." I thought that was appropriate. 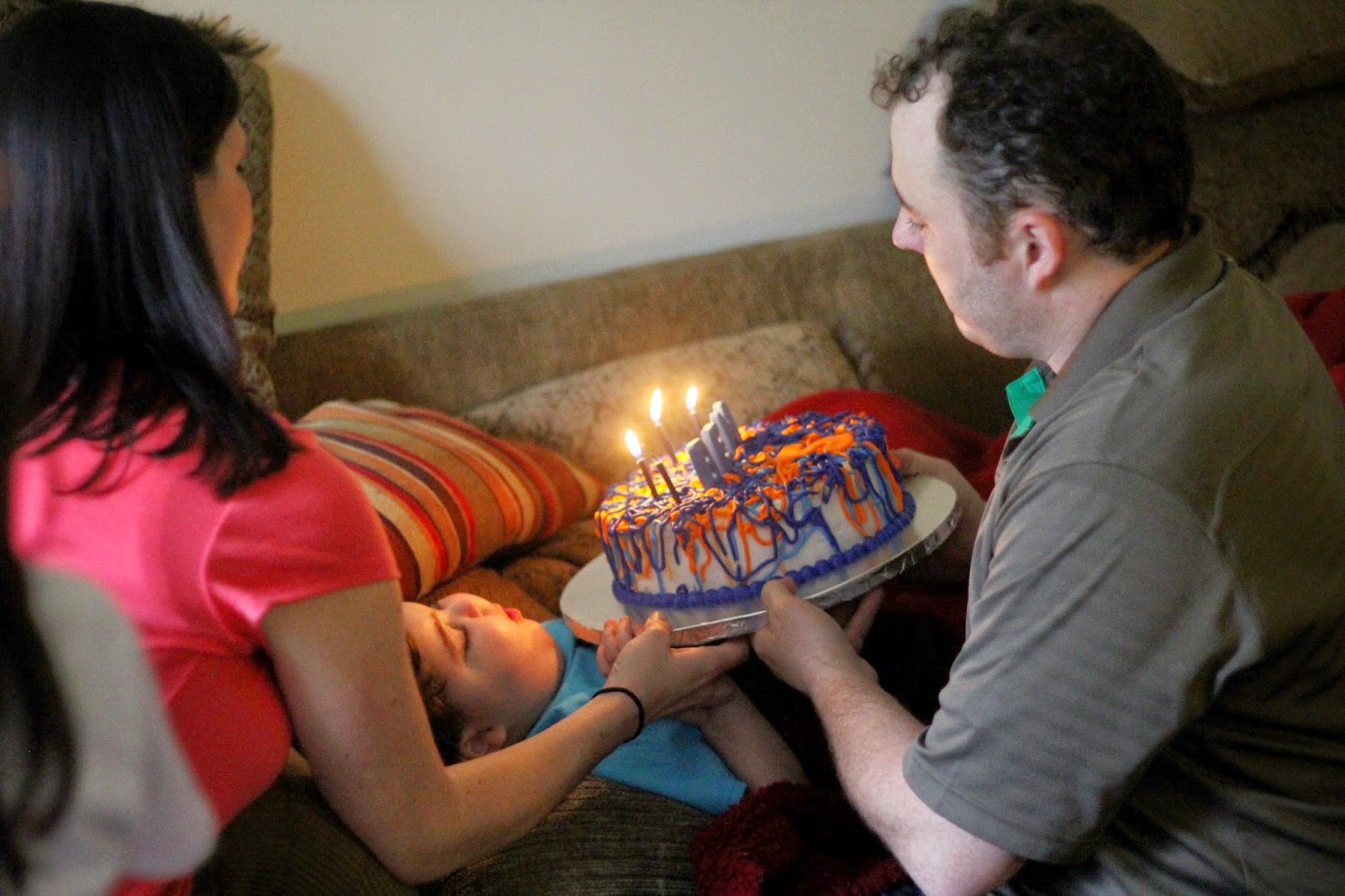 Andy has been putting off work and the dozens of phone calls he should make because he is required to be at Ben's side every moment of every single day. Poor Andy has been a hostage in his own home. He cannot go to the bathroom without Ben's permission much less leave the room. He requires his daddy's presence all throughout the day. His comfort. His strength. Being 21 weeks pregnant, I have much less strength than I normally do and Ben feels more comfortable with Andy adjusting his body or picking him up to hold him on the toilet. There are only a few minutes of the day where he'll settle for Mom's company so Andy can run an errand for him or perhaps take a quick shower.
Last night, Andy drove to the city to get a few things done after the kids had gone to sleep. He could have never anticipated the fact that Ben would wake up less than an hour later. And... want... only... him. I went in to give him a drink of water, to help him urinate in the cup, and then he wanted me to adjust his body to the side. He was frustrated that I couldn't understand his slurred speech and was not doing what he wanted. "Can you just have Dad do it?" he asked in frustration. I tried to avert the fact that he was twenty-five minutes away. But ultimately, I had to tell him why Daddy couldn't come up and help him. And he went nuts. I texted Andy, who left immediately, but then I had to sit with an anxious Ben for almost a half-hour as we waited for his rescuer to return. Oh, my word. Pretty sure I aged about two years during that ordeal.
Yesterday, Andy and I decided we ought to order a hospital bed to give him the flexibility of movement. His back is just so sensitive and propping him up with pillows has proven to be very difficult. It arrived today. I don't think I was ready to emotionally handle that delivery.
All afternoon, I couldn't get ahold of myself. The tears just flowed and flowed. I would blame it on the pregnancy hormones, but even I know that's not entirely true. The last time I saw a bed like that, we were at Children's. I slept in one just like it in the ICU, for nights on end, next to my son who was all connected to wires and cried and cried to go home. All of that came back when I saw it again. All the pain and uncertainty returned. And it hurt like crazy.
I'm grateful that we can be home. I can't imagine Ben being in the hospital. Traveling to and from the city multiple times a day, trying to field all of the questions from Jack on why he can't come home, why he can't see him, or taking turns with Andy, spending the night. I can't even imagine trying to comfort Ben and sustain the rest of our family through something like that. I'm so grateful to be home. And even though Ben gets really irritated at times, I know he is grateful to be home too.
Andy and I have been crying a lot. Especially at night when we have some quiet moments to ourselves. This road is so much harder than we could have anticipated. It's difficult to think about the possibility that this is what my son might have been created for - to bring people to Jesus, to reaffirm people in their faith, to bring hope to a desperate world - when he hasn't even entered kindergarten. That is both humbling and hurtful.
I am not scared about the destination. I have never been more confident about our future in heaven. Just the journey getting there.
So I guess we will have to continue putting off our desire to create structure and life-skills into our kids for a while longer. Even though it goes against every bone in my body. There will be a time for that, just not right now. I will continue to take one day at a time, taking advantage of the grace God has set aside for me for each day. And relying on God's strength to carry us through. Because He is more than able. And no matter how dark the road feels at times, we will make it to the other side. By God's grace.
Posted by Mindy Sauer at 7:32 PM