Struggling Through the Transitions

The doctors tell us that Ben is "in transition."
I really really hate transitions.
Ben knows his body is changing. Even with the increased medication, he does not feel like himself. Overall, his anxiety has improved as he'll let me sit with him for longer stretches, giving Andy a little more wriggle room than before. But he still would prefer no one to leave the house. And over the past twenty-four hours, he has been complaining about his head hurting. "On this side," he says in slurred speech, gesturing to the left side where his hair is gone. Where the tumor began. And where it continues to grow. He sleeps a lot. His new hospital bed has been a blessing, though still an eyesore, making it easier for us to join him for a nap without disrupting as much as on the couch. We can easily move his back up and down to suit his needs.
Today, he said that he wanted to take his nap downstairs and not up in his bed. When I agreed, he said that he wanted to sleep downstairs at nighttime, too. I told him that wasn't a problem at all. He smiled. I'm grateful that he feels a bit of comfort. But I'm also sad at the possibility that he won't be returning to his own bedroom to sleep in his own bed anymore.
We had a Mother's Day tea at preschool this morning. It was just beautiful and the teachers did so many things with the kids to make us feel special. One of them was a class book where each of the kids were asked to finish the sentence, "I love my mommy because" and Jack said, "because she sings to me before bed." When everyone ooed and awed, Jack added in my ear, "And that's why I sleep all the way until daytime." 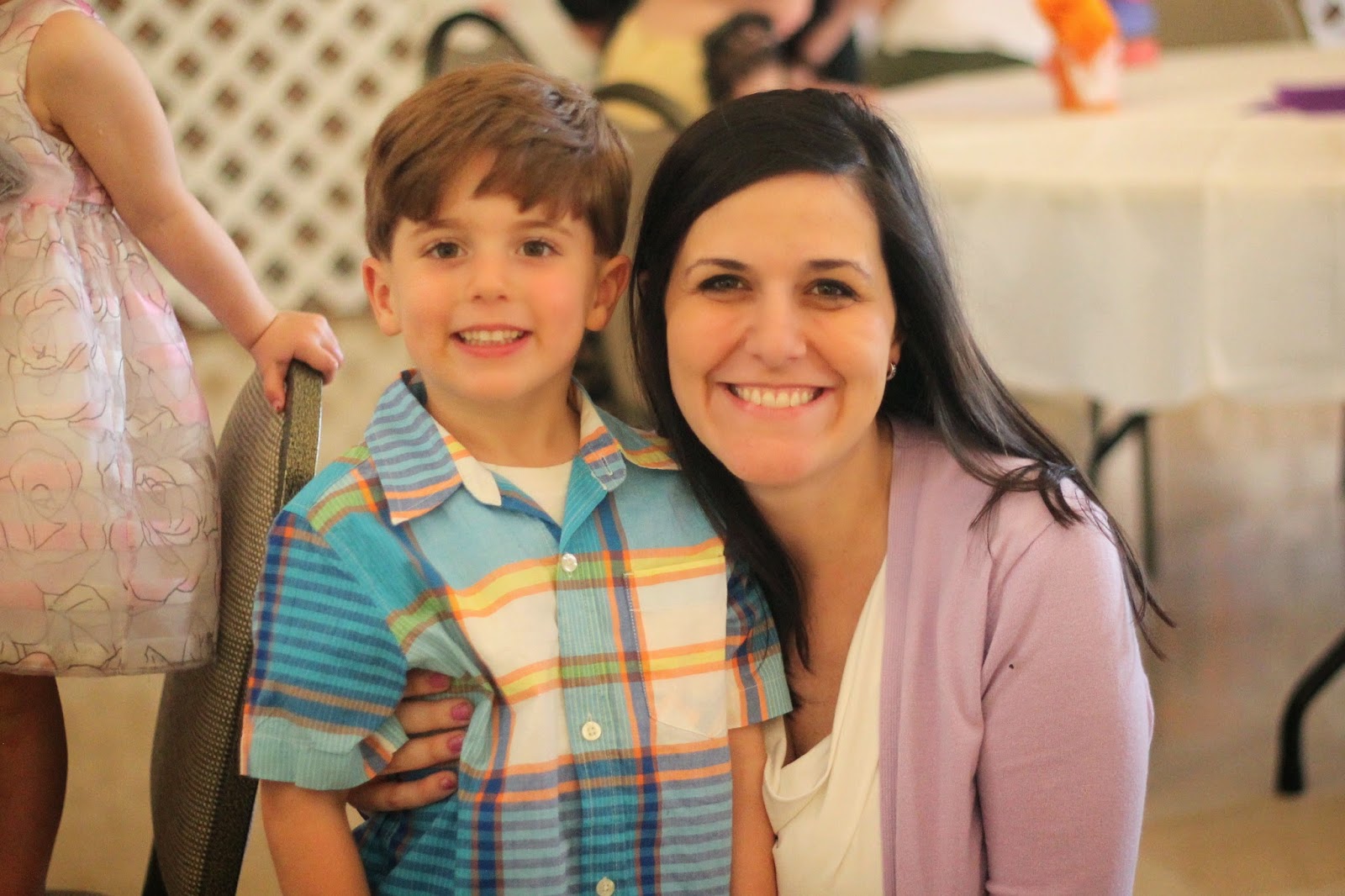 Me and Jack at the Mother's Day tea this morning
Both of my boys love that I sing to them at night. I sit in between their two beds and softly stroke their hair as I sing. Songs about how much Jesus loves them and that he's got the whole world in His hands. Songs that comfort. I'm so glad they let me still sing to them even though they're big five-year-olds now. I'm going to miss stroking Ben's hair next to Jack's tonight. There was always something special in those quiet moments with just the three of us. Makes me remember fondly those sleepless nights when they were in utero and I'd dream about what life would be like with them after they were born. The only other time I couldn't sing to them at the same time was when Ben was in the hospital. My heart just aches at the thought of them being separated again.
Andy didn't text me to say how anxious Ben was while I was at the tea this morning. He wanted me to enjoy myself. When we did arrive home, Ben immediately calmed down. Andy said it was the first he stopped crying in the past hour and a half. Oh, my poor baby. He downed the cheeseburger he requested that I bring for him and then asked for some pancakes.
While I stirred the batter in the kitchen, Jack came over and so I asked if he wanted some as well. "No, thanks. I just want Ben to get better."

Oh, my baby. He doesn't usually mention Ben like this. "I know, buddy. Me, too."

"Very much," I added, stifling tears. Geesh, why did I put makeup on this morning?

"I love him very much, too." Then as he turned to walk away, he added, "And I still want to play that game where we bump heads."
And for the fiftieth time today, my heart broke. Jack misses his brother.
Preschool graduation is in less than two weeks. It's the official send-off for preschoolers, signaling their readiness for kindergarten. The other moms this morning were talking about how emotional that will be. To see their five-year-olds, their first borns, ready for full-day Big School, five days a week. I agreed. It is going to be emotional. But not only will I be anxious for Jack, excited for his next step. I will also be sad for another reason. Sad that the chances are pretty low that Ben will be joining him.
I do not mean to act as though Ben is already gone. I don't want anyone to think that we have given up praying for God's complete healing and mercy in his life. God is still in control and still very capable. But I am also human and very aware of the prognosis I see in front of me. And barring the possibility of a miracle, Ben won't be with us for too much longer. We have no clear time-frame. Ben has already proven that he will not be confined to the parameters set by modern medicine.
The tumor appears to be growing. Not only because of Ben's recent complaints, but because you can physically see it. The scars from his incision are expanding. They are growing wider. It was the reason the neurosurgeon did not feel comfortable with a second surgery. He had been worried he wouldn't be able to put his skull back together because the tumor would just want to continue pushing out. His appetite has decreased and today is Day Three without a bowel movement. We will have to give him an anal laxative tomorrow morning if he has still not gone by then. Ben still takes all of his medication orally - and he does most of it himself - but that might not last much longer either. With the increased frequency of his meds, Ben gets more irritated. He does not enjoy being injected with foul-tasting medicine every other hour of the day. The day may not be too far away where we may need to access his medaport and administer his medication intravenously.
And so we wait. And pray. And plead for mercy.
Being "in transition" signals a change for everyone in our family. If Ben is going to nap in the living room, the other kids must vacate the house in order to give Ben the quiet atmosphere he needs. That requires extra planning. Thank God for family that is close by and willing to help care for them. If Ben is more comfortable downstairs, Andy and I will have to limit the amount of cleaning, TV-watching, talking, etc, that we do in the evening after the kids go to sleep. And my husband will have to sleep downstairs on the couch with Ben.
Jack can sense the drastic changes happening in our house right now. I'm always curious as to what is going on inside of his inquisitive little head. But I have a feeling that the majority of his questions won't come until later. While all of this has happened really quick in the grand scheme of things, it has also happened relatively slow. We have all had to give up a few things at a time. We have had all had a little time to adjust to each new stage of our new normal. So I'm hoping that Jack will continue to be flexible with whatever changes might come our way just as we have been asked to do.
As I've said before. I am not afraid of heaven. It's the journey getting there that I dread.
Jack is right. We do love Ben very much. Very much. He is and has always been an integral part of our family. And I do look forward to the day when the boys can "play the game where they bump heads" again. Until that day, we will keep on keeping on. Because even though I have never been a fan of change, nor have I been welcoming of transitions, this is where we are. And so we will keep walking forward. With our eyes looking heavenward. Knowing that God is holding each of us in the palm of His loving and capable hands.
Posted by Mindy Sauer at 12:43 PM