The Effects of a Purpose-Filled Life

I miss Ben.
I really really miss Ben.
I see traces of him everywhere. Around my house, in my car, in the sky, in my kids’ eyes… everywhere. Most times, it makes me smile. Other times, I burst out crying. And there are still other times where I try and resist tears, but my eyes well up until they can’t hold anymore and those involuntary tears fall onto my cheek. Without even blinking.
I really miss Ben. My old Ben. The trim, active Ben. The one that would give up his snack if it meant his brother got the one he wanted or embracing his sister in an impromptu hug. The one that waited for me. The ones whose eyes I would meet in the rearview mirror and would then go into a spontaneous and goofy face. The one who wait in quiet for more than ten minutes in another amazing hiding spot playing a game of hide and seek. The one who would playfully jump on his dad to rescue his brother while wrestling, yelling, “Twin power!” The one who frequently reminded me that he had correctly guessed the gender of our newest baby girl. The one who would watch movies standing on his head. 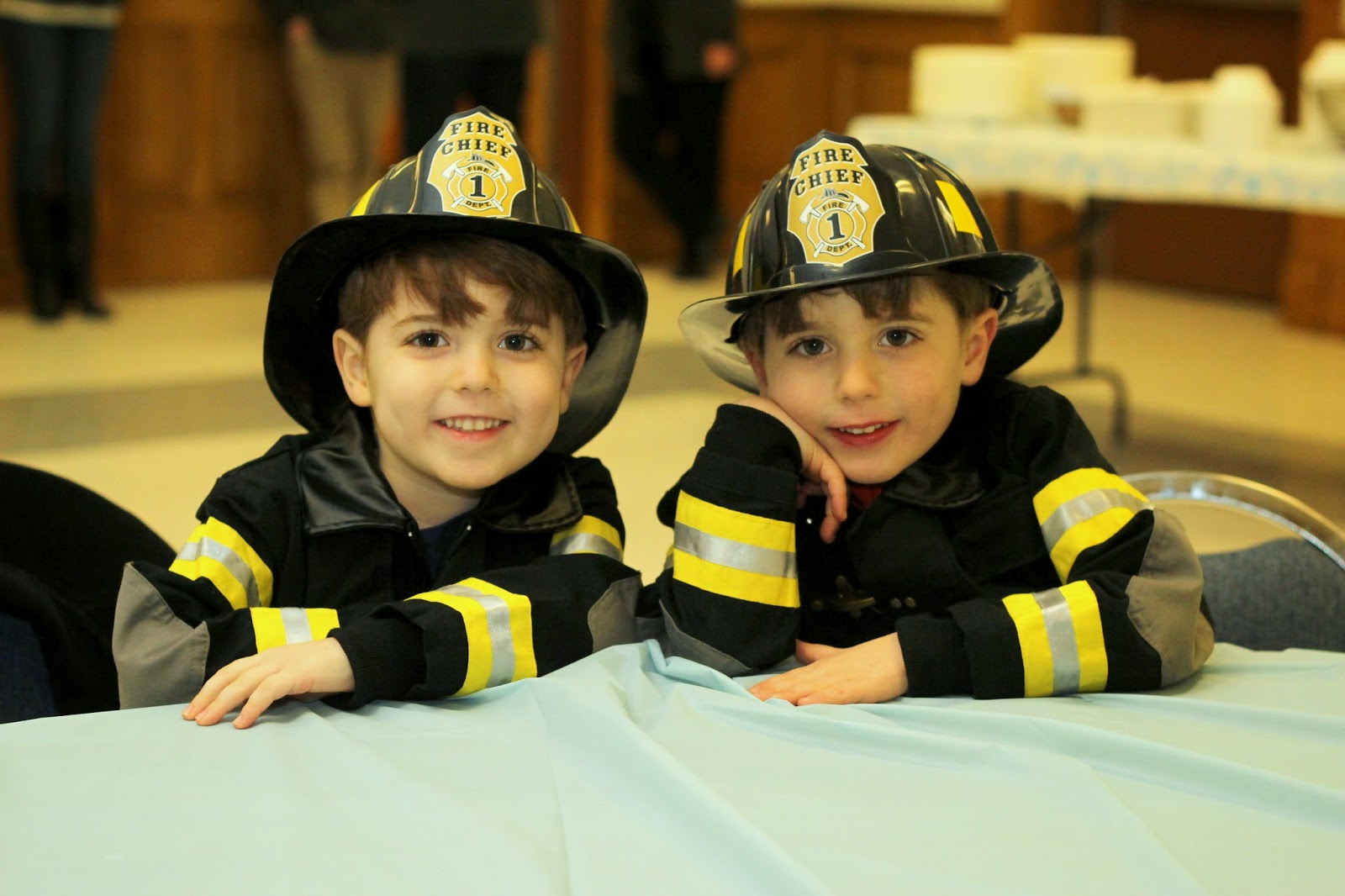 Ben and Jack were complementary firefighters for a day in early March 2014
Yeah. That one. I really really miss that boy.
While cleaning up the disaster that is my house, I’ve come across many reminders of his earthly existence. His favorite Build-A-Bear. The Nerf gun with his name written in permanent marker. Several blue socks. The little plastic cover from one of his morphine viles. The picture with his siblings in the backyard. His full name written on my dry-erase board in my kitchen. I still have the picture boards from his wake that I can’t bring myself to do anything with yet. I just love seeing such a beautiful collection of his contagious smile in one place. And I love that my kids frequently stop to look, too. And remember. And smile.
One of the most unexpected ways I’ve seen Ben is in his twin brother, Jack. I suppose it would have been obvious to physically see one’s face in the face of his identical twin. But the similarities don’t begin and end with the physical traits. Jack has seemed to adjusted his persona to fit pieces of Ben. Characteristics that would have been traditionally associated with Ben seem to have been assumed by his older brother.
Jack seems to have found a new delight in pleasing us. In bringing us cold glasses of water. Propping another pillow under my back when I’m reading him books to make sure I’m comfortable. Asking if the baby is feeling alright if he can do anything. Resting his hand on my growing belly as I softly sing to him at night. Engaging his sister in a game of chase. Giving her the toy she wanted even though he had it first.
And I’ve gotta be honest. I really didn’t expect this.
Andy and I often talk about this new change. This refreshing change. How unexpected it is, how wonderful. And we always seem to land on this fact: we are all better people because Benjamin was born.
This morning, I was getting breakfast for the kids when I saw a butterfly near the kitchen table. I called for Jack’s help and then remembered where it had come from: the chrysalises must have hatched! Our neighbor, who would frequently guide the boys toward different insects and small creatures in her backyard, had given us a butterfly kit a few weeks ago. Ben treasured the little cup that held six caterpillars as well as all the food they’d need to make their change. He slept with it until the last few days before his passing. A few days after he died, the caterpillars built a chrysalis and were waiting until the right time to emerge into their new bodies. We had continued to care for our new friends in Ben’s absence and Jack would dutifully show any guests his creatures-in-waiting.
To say that Jack was excited about the four new butterflies would be a gross understatement. That boy was elated! After we established the fact that he would only be able to hold the fragile butterflies when Megan napped (they are just not as durable as the worms and toads Meg normally handles,) the kids amused themselves by watching the butterflies eat the watermelon and sip the sugar water we had gently placed inside. 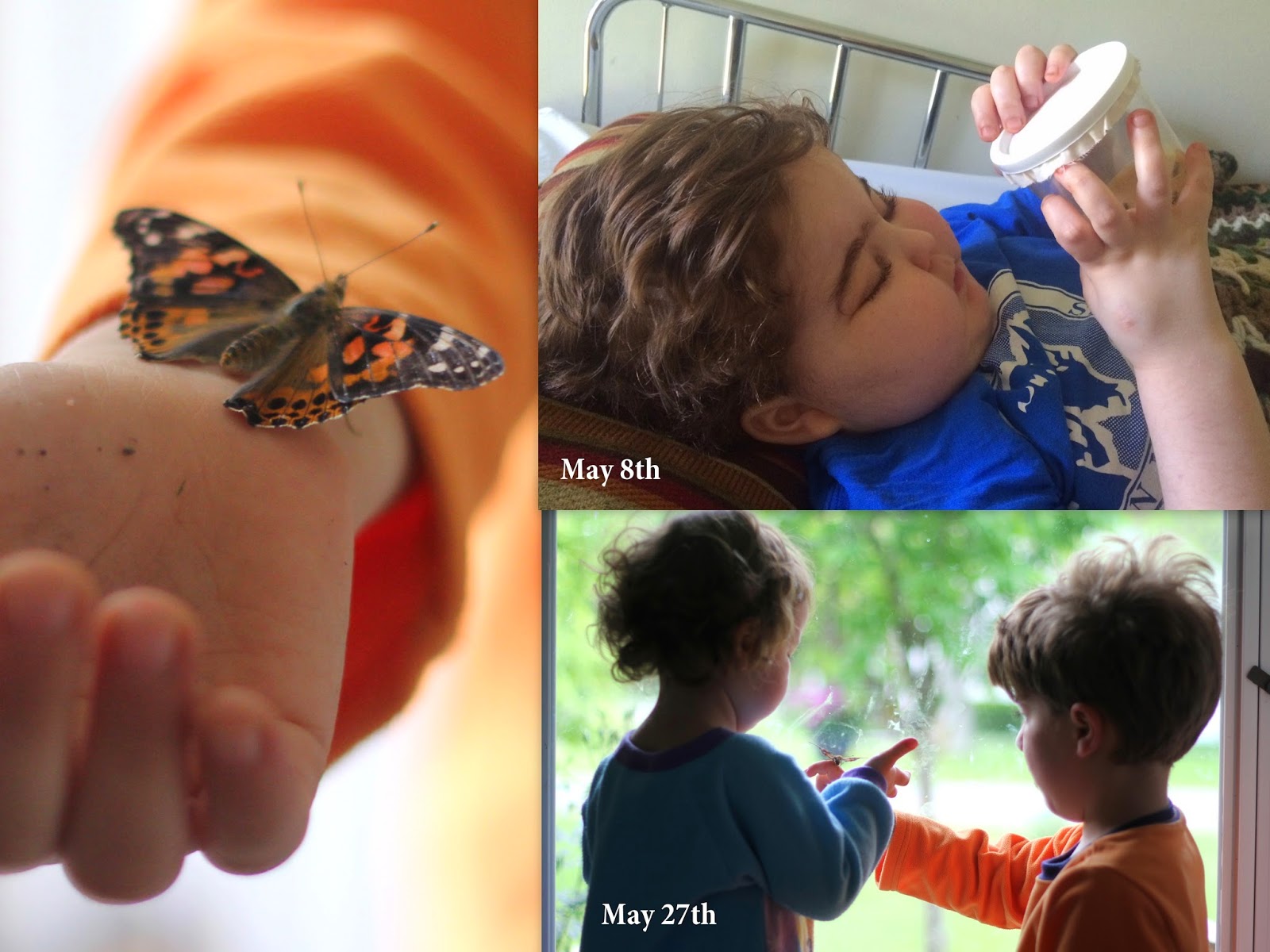 The transition from a caterpillar to a butterfly is an amazing one. Their transformation has often been associated with our own journey into heaven. Abandoning one body and inheriting a new one. What a beautiful way for me to discuss the reality of heaven with my kids. Especially just two weeks after Ben’s homegoing.
We’ve had many opportunities to talk about Ben with his brother. Perhaps that’s the benefit of having a call-it-like-I-see-it kinda kid; we always know what he’s thinking. We talk about what Ben might be doing in heaven right at that moment. He’ll ask if it ever rains in heaven. If Ben ever gets hungry or tired. How many different animals he’s playing with. And how he never has to come inside at the end of the day. The other night at bedtime, Jack said, “I really wish Ben could have grown to be a man.” Andy had just started for the door, but returned when he heard his firstborn’s words. We agreed. And all said how much we missed him. But were then again reminded of the fact that God was taking care of him in heaven now, where there are no headaches, no sickness, and no sadness.
“I’m going to grow into a man,” Jack added. “God told me.” I’ve never audibly heard God speak and I’m not exactly sure when He would have chosen to communicate this with my son. But for some reason, I don’t doubt that to be true.
I really miss Ben.
I don’t suppose that will ever change.
I still hate that this happened to my son. Our family. Why God, couldn’t You have chosen someone else? Ben is a twin. Loved. Appreciated. We knew how blessed we were with his existence before all of this started. We didn’t need something like this to shake us into reality. To remind us how good we’ve had it. Why? Why?
There are so many things I won’t understand on this side of heaven. I just won't. There are some things that we will never understand. We just have to trust that God has a plan and that He is working it out for our good. Even if that good isn’t felt in the moment.
But as I sift through the sympathy cards, the emails, the Facebook messages, I am comforted. Comforted to know that what my pastor said was true: that my son lived – and died – with a purpose. He did not die in vain. Because of his story, people are going back to church. They’re encouraging their kids to play in the mud. They’re taking more pictures of the everyday activities. They’re reevaluating their lives and how they want to be remembered. His story is not just another tragedy, another child losing their fight against an aggressive disease, another sob story. His life is one of God’s goodness and mercy. God’s love and design.
Knowing those things don’t take the pain away. But they do help ease it quite a bit.
My son lived with purpose. And although I would have been happy to celebrate his life for many more years with him on earth, I am glad to have had the opportunity of living beside him for five wonderful years. And I also have the added benefit of watching his influence continue in the lives of my kids. 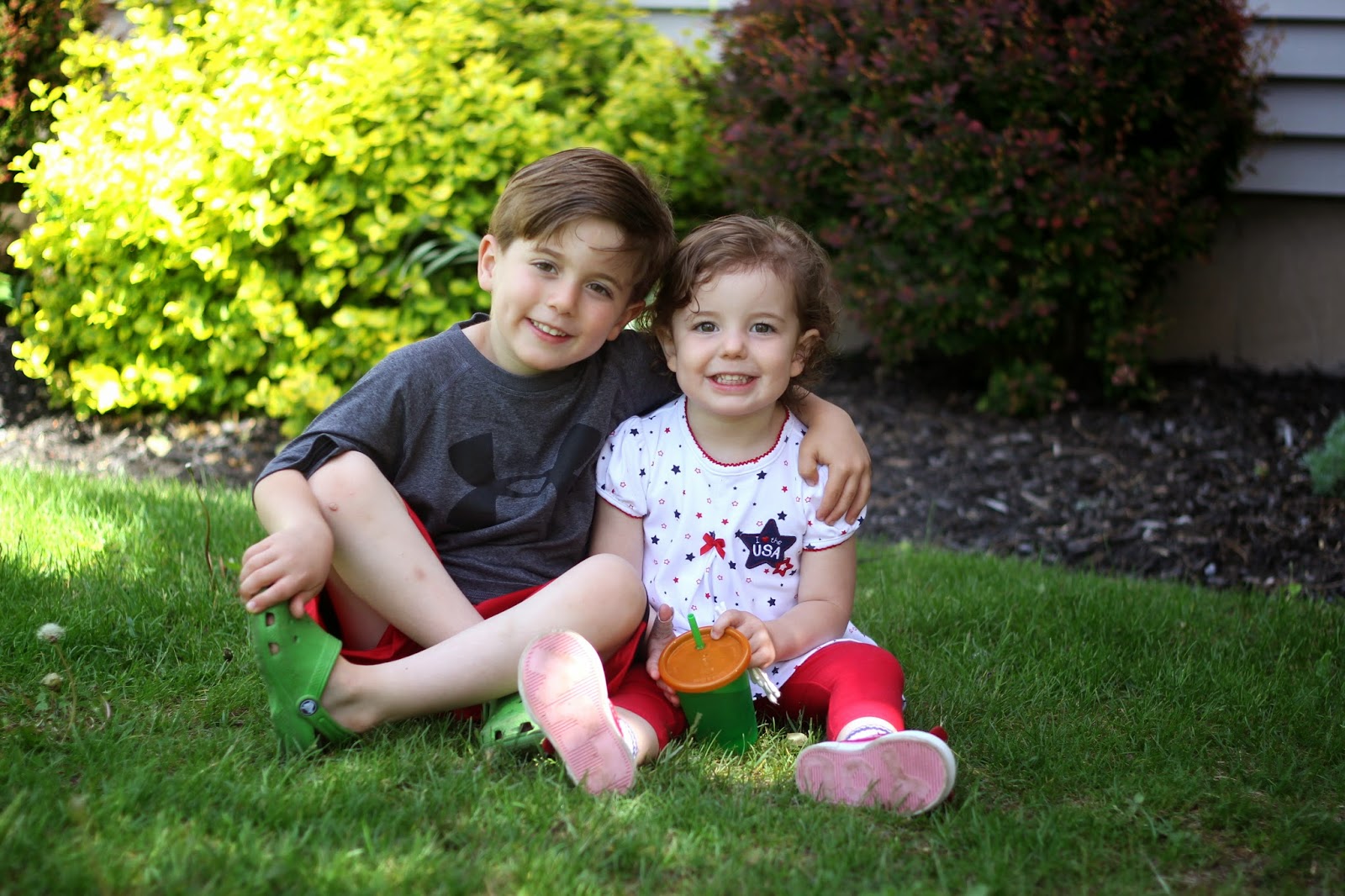 Wow. We have been so blessed.
Posted by Mindy Sauer at 6:27 PM